Once there was a boy named Andre who wondered what he might be when he grew up.

His dad was an accountant. He asked Andre, “Do you like working with numbers?” But he did not.

His mom was an interior designer. She asked, “Andre, would you like designing interior spaces for homes and offices?” But he did not.

He often spent time with his grandma and helped her in the kitchen, and he asked her what he might be.

His kind and gentle grandma said, “Andre, you’ll be what you are meant to be. Now, hand me that towel and let’s finish up this fresh pasta.”

As they worked in the kitchen together, Andre started working on an apple strudel that he had learned how to make years ago while watching his grandma’s masterful hands and listening to her simple instructions.

“Well, it might be fun to be a landscape architect, an architect, or an engineer, but I’m just not sure,” he said.

“You still have plenty of time to decide. Just do something you love and have a passionfor. Now, let’s get started on the cheese bread for the meal,” said Grandma.

As Andre worked quickly and expertly in the kitchen, he wondered about other jobs like being a plumber, an electrician, and maybe even a firefighter at a fire station. During another day in the kitchen with Grandma, he began talking about different types of jobs.

“Pass the steaks and start the marinade, if you would, please,” said Grandma. Andre quickly put together garlic, salt and pepper, oil, vinegar, soy sauce, lemon, and white wine. He quickly whisked them together and handed the sauce to Grandma to float the steaks in. Next, he prepared savory Swiss sausage that they would grill for dinner tonight.

As Andre put the fresh bread in the oven, he said, “Grandma, the thing that makes me the happiest is working with you to get meals ready. It’s fun, challenging, and there are so many different types of cooking techniques so I never get bored.”

“Andre, I told you to find something you are passionate about and love to do. All these   years in the kitchen together have been the happiest for me. I think you’ve discovered what you need to be: a chef!” said Grandma with a twinkle in her eye.

“Wow,” said Andre. “All this time the answer’s been right in front of me. Thank you, Grandma!” said Andre.

“This is the best day of my life!” smiled Andre. 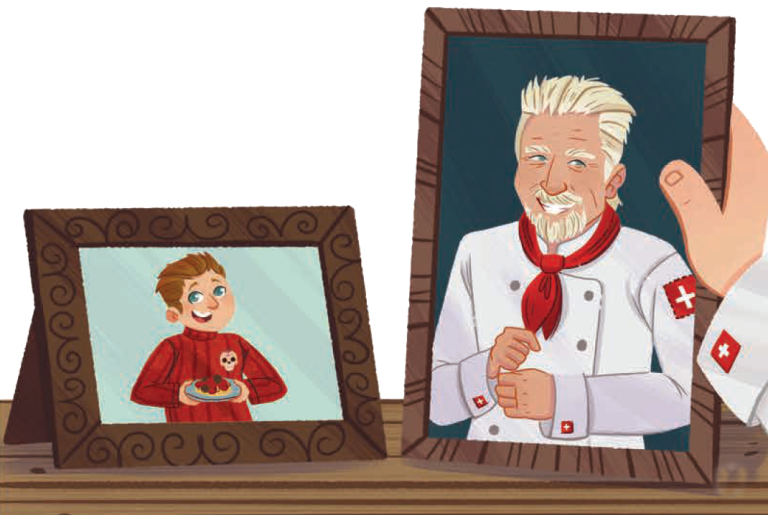