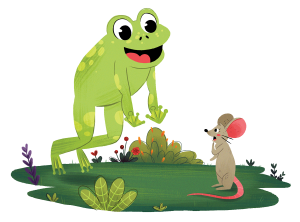 Once upon a time, a little frog left his pond to visit his grandmother in the big pond beyond the hills. The little frog was happy and excited for this big adventure as he hopped away.
Soon, he ran into a mouse. “Hi, I’m a frog,” he said proudly.
“I’m a mouse,” said the mouse.
“What can you do?” said the frog. “I can hop and make this great sound: RrrrBbbbTttt!”
“Gee, I can’t do that,” said the mouse.
“Too bad,” said the frog proudly and hopped on. “I just love being a frog.”
Soon, he ran into a lion. “What the heck are you?” said the little frog, “You’re so big.”
“I’m a lion,” said the lion.
“What can you do?” asked the frog. “I can hop and jump and make this great sound: RrrrBbbbTttt!”
“Gee,” said the lion, “I can’t do any of those things.” 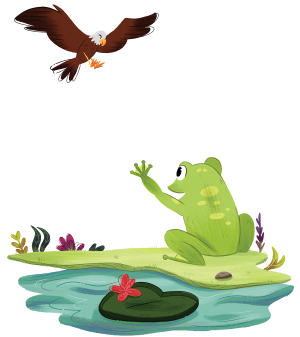